[From The North Star] Dario Cankovic is an unhyphenated Marxist without adjectives, a doctoral student in philosophy at the University … END_OF_DOCUMENT_TOKEN_TO_BE_REPLACED

[From Maosoleum, a new heterodox Maoist blog.  See also the commentary and discussion on the original site. The article mentioned … END_OF_DOCUMENT_TOKEN_TO_BE_REPLACED

This article is being reproduced from BASICS Community News Service, a left people’s media organization in Toronto. It was produced … END_OF_DOCUMENT_TOKEN_TO_BE_REPLACED

[From Warscapes]
by George Ciccariello-Maher

“In their housing developments

they placed first, broken bottles on top of their walls,

then, barriers and armed guards,

the concentration camp is the street,

the barrio hills and poverty,

the dust and the junk,

where they live, God willing…

– François Migeot, “Who divides the country?”

Venezuela is a society at war. There is no need to sugarcoat this fact, in part because it is nothing new. But against those voices who would insist that it was president Hugo Chávez and the Bolivarian Revolution that divided Venezuela into two warring camps, it must be said: the camps already existed; the Revolution has simply revealed them.

On the Virtues of Open War

Sometimes, often, open war is preferable to its opposite. I don’t call that opposite “peace” because of the need to destabilize this all-too-common, all-too-easy opposition. No, this war is nothing new. Instead, it is a question of rendering visible the war that already exists, that has existed, and that continues unabated. Whereas Frantz Fanon famously diagnosed colonial society as Manichean, as cut into two, inhabited by two deadly opponents whose enmity is as clear as day, things are rarely so clear in ostensibly postcolonial Latin America.

The war has been going on for many decades, even centuries, but from the 1960s to the 1980s it remained largely concealed under a blanket of petrodollars. Occasionally, it was measured in bullet-ridden corpses: in the sporadic guerrilla struggle of the 1960s and in state-sponsored massacres like Cantaura (1982), Yumare (1986), and El Amparo (1988). But most would agree that this war became absolutely undeniable on February 27th, 1989, in the popular, anti-neoliberal rebellion known as the Caracazo and the massacre of massacres that followed.

What former president Rafael Caldera called the “showcase window for Latin American democracy” was irreparably shattered, and no quantity of rhetoric could repair it. The events of 1989 begat Chávez’s failed 1992 coup, and 1992 begat his eventual election in 1998. Suddenly, wealthy elites were wondering aloud what had happened to their powerful myth of Venezuelan harmony. To lose the comforting myth of one’s own magnanimity was one thing, but to lose power to a dark-skinned brute was another thing altogether.

END_OF_DOCUMENT_TOKEN_TO_BE_REPLACED

Analysis of Idle No More Mobilization 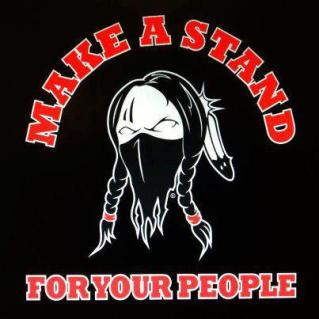 On Dec. 10, 2012, several thousand Native peoples rallied across Canada as part of a national day of action dubbed “Idle No More” (INM). The protests targeted Bill C-45 and the policies of the ruling Conservative Party. In Edmonton, as many as 1,500 turned out, one of the largest. A reported 400 people attended in Calgary and Winnipeg, with anywhere from 100 to 300 participating in Toronto, Regina, Saskatoon, North Battleford, and Vancouver.

Bill C-45 is an omnibus bill meant to put into law parts of the Conservative Party budget introduced in early 2012.  It is also known as the Jobs and Growth Act.  Its full bureaucratic title is Bill C-45: A Second Act to Implement Certain Provisions of the Budget tabled in Parliament on March 29, 2012 and Other Measures.

As an omnibus bill it includes changes and revisions to a wide number of federal laws and regulations. These include the Fisheries Act, the Canada Grain Act, changes to MP’s pensions, the handling of hazardous materials, and a new bridge to Windsor, Ont., from Detroit, Michigan.   One of the more controversial provisions are proposed changes to the Navigable Waters Protection Act, which remove thousands of lakes and streams from federal protection under that law.

Some of the changes proposed under Bill C-45 have been criticized by environmentalists and Indigenous peoples resisting mining, oil & gas projects, as well as proposed pipelines:

“Together, the changes proposed in the omnibus bill would further weaken Canada’s environmental laws, remove critical federal safeguards, and reduce opportunities for the public to have their say about projects that could threaten the air, water, soil and ecosystems on which all Canadians, and our economy, depend.” 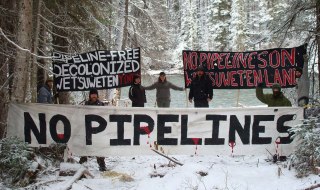 For Indigenous peoples in particular, along with the threats to land and water, are proposed changes to the Indian Act including an amendment to change the rules around what kind of meetings or referenda are required to lease reserve lands. The aboriginal affairs minister would also be given authority to call a band meeting or referendum for the purpose of considering an absolute surrender of the band’s territory. END_OF_DOCUMENT_TOKEN_TO_BE_REPLACED

Sites of Beginning Part 1: Are communist openings structural or evental? by Mike Ely LPA writes on something that preoccupies me: … END_OF_DOCUMENT_TOKEN_TO_BE_REPLACED

[From the Communist Organization of Greece]

Our contribution can reach the point of formulating an opinion (open for debate) and sharing the experience of a small section of the world’s proletariat, that of the Greek communist movement.

The Greek communists and the Chinese Revolution

“Our countries have two things in common: our ancient civilization, and two fatal numbers: 6 and 7. You are on the 36th parallel and we are on the 37th. You have the 6th Fleet of the US Navy, we have the 7th”.

(From a speech of Chairman Mao on a meeting with the representatives of the Greek-Chinese League of Friendship in 1965.)

It is of interest to state the opinion given by a great Greek communist who pioneered in the antirevisionist struggle in Greece. It is that of Comrade Yiannis Hontzeas, who, in the note that follows, gives us a testimony of what the perception of Greek communists about the CPC was, and what their expectations were, before the open conflict with the Russian revisionists began:

When I. V. Stalin died, many communists in our country, the majority of the veteran EAM members [EAM – National Liberation Front] who remained faithful to the CPG’s [Communist Party of Greece, CPG or KKE] and the EAM’s traditions during difficult times, expected that Chairman Mao will be invited in Moscow in order to advise, to lead, to arrange the things. Regardless of what anyone may say today, Mao was then, after the death of Stalin, regarded as the leader of the world proletariat, the guide of the world communist movement. If that was a simplistic faith, this is an issue of different nature. Mao visited Moscow on two separate occasions: The first time in 1950 in order to sign the treaty with Stalin, and the second time in 1957 in order to attend the Conference of Communist Parties. After the events of that period, Mao’s name was transformed from legend to curse – to become a legend again in the ’60s and ’70s, wining the minds of both the youth and the working people, gaining even more glory after years of slander. But how did Mao and the Chinese Revolution become known in Greece? END_OF_DOCUMENT_TOKEN_TO_BE_REPLACED