Introduction to Issue #5 of Uprising: The necessity of women’s leadership in communist struggle

That Issue #5 of our theoretical journal Uprising should foreground an analysis of women in the imperialist world system is long overdue and much needed in Revolutionary Initiative (RI).

Comrade Stella B’s article, “The super-exploitation of women and developing a revolutionary mass line” (pp. 5-21 of Issue #5), has sparked in RI a period of intensive and extensive study and exchange over questions of how women’s place in capitalism has been conceptualized and the necessity of women’s leadership in revolutionary organization. This process has been aimed at arriving at a correct line on women’s economic and social exploitation under capitalism, the centrality of women’s liberation to revolutionary struggle, and the practical work of organizing women through the praxis of mass line. Naturally revolutionary feminist struggle is a continual practice, but advancing the feminist theory of RI is central to the encouragement of women’s revolutionary leadership and class struggle. But this study has also served to correct the misguided line previously held in Revolutionary Initiative and put forward in earlier ideological documents.

First of all, women receive barely a mention in our founding documents (see RI’s Volume I: 2006–2009 Ideological Documents). The exception is a section of the piece, “Thoughts on the RCP Program.” (RCP refers to the Revolutionary Communist Party of Canada).

In this commentary on the RCP Program – which we believe still has merits in relation to our points of unity and difference with the RCP – RI effectively reduced the patriarchal character of capitalist imperialism’s structure to an outmoded property relation that excluded women from ownership rights of property: “Patriarchy is a specific form of property and social relationship that has been destroyed by the development of capitalism” (p.23 of Volume 1). Feudal and pre-capitalist forms of patriarchy were deemed to be the universal form of patriarchy. This was a wrong position to take. Certainly, some revolutionary feminists advance the notion that it, in fact, was only with the slow transition to capitalism that women’s work increasingly became segregated as purely unproductive (unvalued) labour and women were excluded from social production, or production for profits. This is not to valorize feudalism, but rather to illustrate how capitalism is an exploitative system which was, in part, founded on and continually supported on the backs of women’s unpaid labour, as well as exploited and slave and slave-like labour in the colonies.

To maintain that there is a contradiction between all women and ‘the patriarchy’ creates incorrect lines of struggle and will only hold back proletarian women from their genuine liberation. This is mainly put forward by bourgeois or petit bourgeois elements in the women’s movement, diverting women’s struggles away from the fight against capitalism and diverting them towards the dead end of identity politics (p.23 of Volume 1).

In a weak attempt to challenge an identity politics conception of patriarchy, this line, collectively adopted, simply wrote patriarchy out of the structure of capitalism.

Stella also rejects viewing patriarchy independently of capitalism, but from a very different perspective, one that analyzes gender as a constitutive factor of political economy in general and capitalism in particular. 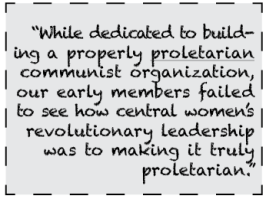 For the record, RI’s initial phrasing was a point of contention within the organization not long after the publication of this document, and was identified as a point of struggle by the earliest women members. Yet none among us were theoretically equipped or able to challenge such formulations and replace them with a correct historical materialist conception of women’s place in society and economy. This reflects an indefensible blind spot toward generations of debates among historical materialists and revolutionary feminists. To be fair, these points of analysis were not constituted as part of a coherent line document on women’s liberation, but were formulated in passing, sloppily and inadequately, in a position paper on the RCP. Ever since this piece was written, we have recognized the need in our organization to formulate a position better reflecting our practice and reflecting the most advanced experiences and thoughts from women in the international communist movement. But the capacity to provide that direction and orientation on the relationship between women’s liberation and communist struggle has only now emerged with Comrade Stella’s intervention.

Despite recognizing the disproportionality of women (as well as youth, national minorities and Indigenous people) in the lower sections of the proletariat elsewhere in our founding documents (see “Theses on the Party Building Movement”), nowhere was this generalized subordinate location of women actually theorized… until Stella’s piece.

Our position, having written patriarchy out of the structure of capitalism, viewed women as “still” facing “systemic oppression,” as if the treatment of women was a holdover of the past and not a central aspect of current social relations. By reducing women’s treatment to oppression, the question of exploitation was written out of the equation.

True, we argued that “proletarian women still need feminism to liberate them from gender oppression, [and] it must be feminism of a new type, a revolutionary feminism that organizes proletarian women to fight their sectoral oppression as a component of the general struggle against imperialism and for revolution” (“Thoughts on the RCP Program”). Yet, here women became another “sector” of the revolution, which obscures the feminization of the proletariat and how the super-exploitation of women’s labour, particularly of the Third World and internally-colonized women, constitutes a critical labour force for the capitalist imperialist system. Rather than viewing women’s problems as general problems, we viewed them as particular problems.

In spite of an incorrect and inadequate line, in practice, a large part of our mass work has been with proletarian women and engaging women in class consciousness raising and class struggle.. It is not as if debates and the development of perspectives in our organization have been completely lacking in content around questions of women’s liberation and revolutionary feminist positions. Indeed, various comrades have in mass work arrived at such positions. But these have not been reflected back into RI’s positions. As a result, the “lack of visible theorizing” on women’s liberation that Stella observes has compromised the development of our mass work with women, since we had virtually no conscious policy or orientation for our membership on addressing women’s liberation and patriarchy in the course of our day-to-day work.

Our incorrect positions on women’s liberation were undoubtedly the result, at least in part, of a mostly male founding leadership, distanced from the realities women face. icated to building a properly proletarian communist organization, our early members failed to see the how central women’s revolutionary leadership was to making it truly proletarian.

The problem should not be misrepresented, however. In nearly every year of assessment and planning, we have earnestly committed to recruiting more proletarian women, to encouraging women to take up leadership positions, and to prioritizing women’s concerns in mass work. The disproportions in membership have been rectified, with a significant proportion of women in the organization. This is tied into a process of cultivating working-class women’s leadership and better confronting male chauvinism. But it is only with the debate and process opened up by Stella’s theoretical contributions that we see the question of women’s liberation and patriarchy being addressed with the attention that it requires, and with it, women taking stronger lead and initiative in the organization. In the final analysis, these have been – we do not fear saying with all due humility to the tasks we confront – ideological limitations that we are now addressing.

To paraphrase the Chinese revolutionary Hsu Kwang, who Stella quotes in her article, women not only urgently need revolution, the revolution urgently needs women. And it needs them in the drivers’ seats.

Some other urgent tasks we face in party-building

After eight years of working and growing our organization, we have reached a point where we recognize the need to consolidate our forces organizationally and ideologically. Such consolidation is necessary for more effective party-building and expansion.

Comrades have been engaged in a wide variety of fields of mass work, collectively building up a rich body of experience. Yet, we have not sufficiently summed up our own practical work and derived lessons for future praxis, nor have we sufficiently located our theoretical growth in our practical work.

We must “orientate [our] thinking correctly, become good at investigation and study and at summing up experience, overcome difficulties, commit fewer mistakes, do [our] work better, and struggle hard so as to build” ourselves into a good revolutionary socialist movement, to riff on Mao. In one of the subsequent issues of Uprising, we will explore our past practice with a journal on Communist Praxis.

Additionally, we believe that our major ideological tasks as a pre-party formation will consist of the following:

We must also reiterate that as we build our organization and work toward a founding congress to launch a Party, we remain as open as we always have been to revolutionary unity with all genuine revolutionary communist and revolutionary anti-imperialist forces. To our friends in the RCP in particular, we reiterate that upholding a line on Protracted People’s War is not a substitute for a clear and comprehensive strategy for accumulating revolutionary forces in Canada, which we have yet to produce but which we see as our task.