“…while the universal validity of Marxism-Leninism has been recognized, Maoism is not fully recognized as the third stage; because while some simply deny its condition as such, others only accept it as “Mao Tsetung thought”. And in essence, in both cases – with all the differences they have between them, they deny the general development of Marxism made by Chairman Mao Tsetung. To not recognize its character of “ism”, as Maoism, is to deny its universal validity and in consequence its condition as third, new and higher stage of the ideology of the international proletariat: Marxism-Leninism-Maoism, principally Maoism, which we uphold, defend and apply”

“…The Great Proletarian Cultural Revolution is, in historical perspective, the most significant part of Chairman Mao’s development of Marxism-Leninism; it is the solution of the great pending question of the continuation of the revolution under the dictatorship of the proletariat; “it represents a new stage, even deeper and wider, in the development of the socialist revolution in our country..”

– Fundamental Documents of the PCP

We direct our communist greetings to each one of you, members of the Communist Parties and revolutionary organizations that fight against imperialism and revisionism.

The objective of the present event is to serve in making the leap that the world revolution demands. The PCP puts forward the realization of an expanded Conference of the RIM with the participation of all the members, in order to address, from our position, the following points:

This is our firm and resolute position as a fraction within the international communist movement.

It is necessary for the communists of the world to systematize the application of Maoism. We consider that it should be done starting from the victory of the Chinese revolution, keeping in mind the position of the PCP, that defined Maoism as the new, third and higher stage of Marxism, and that to be a Marxist today is to be a Maoist.

Comrades, it has been four decades of hard struggle to impose Maoism. A task that must serve to enthrone, to firmly embody Maoism, and that it be materialized in more initiations of people’s wars led by Communist Parties. The CoRIM cannot be exempted from their responsibility. There have been milestones since the victory of the revolution, that the proletariat must assimilate in order to then apply them. There are also problems in the ideological and political line that the RIM has not been able to put forward correctly, and it did not take position at the right moment in the struggle against today’s revisionism. There is lack of understanding and in some cases even opposition against the question of the power.

The fundamental point of Maoism is the power; the power under the leadership of the proletariat, in the democratic revolution; the power for the dictatorship of the proletariat in the socialist and cultural revolutions; and the power based on an armed force led by the Communist Party, conquered and defended through the people’s war. To us this is of vital importance and setting it aside has led to reaching the point of people’s war without building – and that is not a Maoist people’s war; and the revolution cannot advance, see the situation in Nepal. This is a principal problem that must be addressed extensively in the RIM, and having a firm position.

The Great Cultural Revolution implies a milestone in the development of the dictatorship of the proletariat towards the consolidation of the proletariat in power, the masterful handling of the two-line struggle by Chairman Mao, in the GPR, and of how to face the struggle between restoration and counterrestoration, the role of the militias (the armed sea of masses), this arms us ideologically and politically to confront the new problems of the world revolution and here in Peru. Of how to build a Communist Party to lead the war, militarized, and once initiated develop the war until communism with the armed sea of masses – in this way the revolution is not led off its course – and how to combat these new revisionists, see their essence, their perspective and their collusion with their new masters.

Concerning our Party experience: the PCP, applying Marxism-Leninism-Maoism, principally Maoism; applying the principles of concentric construction of the three instruments of the revolution, the militarization of the Party, the application of the principle of Great Leadership and Great leaders of the revolution, that the revolution is not led from the prisons; being firmly rooted in and starting from principles allows us to continue on the course laid down by the Party and the Congress, we have warded off the takeover of the regional committees by the ROL [Right Opportunist Line – eds.], that have tried to take them by assault, answering these miserable ones in a forceful way and as the capitulators they are; their role is to be swept away. It has not worked out for them at all, setting up false peace letters (written by Merino Bartel), videos directed and edited by Montesinos personally and TV-channels, transfers and inspections in the prisons to control, coordinated with Morote, Cox, María Pantoja, Miriam; the so-called self-criticisms, with scripts by the SIN, from Nancy, Roldan, Julio, etc. We are forged in that the war is not stopped even for a minute, it is that simple, not to lower the banner of the  revolution under any circumstance; the point is to continue applying the principles. The Great Leadership is isolated since his arrest, and until today there has not been any public and direct presentation, only letters, videos, books, centering in the pronouncements of capitulators.

Today the reaction, with the advice of yankee imperialism, is implementing a new repentance law; they say the previous law fulfilled its role, now we must update it; they have employed an Israeli advisor. The CIA was not enough; the MOSSAD says: you need night helicopters with more firepower for the countersubversive struggle. They ask Congress for more funds, and have changed the functions of the prosecutors in the emergency zone, now the police will do it. Now they have a new law – the so-called immunity – so that the police is authorized to shoot without questions asked; now they say they are fighting against narco-terrorism (like in Afghanistan with the opium and in Colombia and Peru with the cocaine). 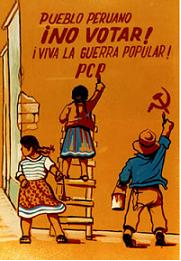 About the people’s war: centering in the construction of the new power, around the fluidity of the people’s war, exercise joint dictatorship in the People’s Committees, this has let us successfully confront the inflection in spite of the arrest of the Great leadership and a large part of the leaders. Applying the principle that the communists that are left have the duty to continue and maintain the course of the revolution, the principle that the Party commands the rifle, integrating the militia inside the army, this has allowed us to regroup and all-embracingly lead the army and avoid it being used by the ROL. We consider that, in the revolution in Nepal, it is unacceptable that the revolutionary army be demobilized and that the weapons are handed over “under the leadership” of the UN. The Party must be inside the army and this supports the new power – without it the people would have nothing and the revolution in Nepal will end in genocide.
Struggle against present-day revisionism

The experiences of the international proletariat show that revisionism and the counterrevolutionary coups appear inside the Central Committee. See CPSU, CPC, PCP, CPN. In moments when the revolution is about to make leaps or retreats, before the loss or arrest of Great Leaderships, see CPSU, CPC, PCP. First by revising the ideological and political line, then denying everything openly, hoisting the red banners of  communism with pictures of Chairman Mao, and Chairman Gonzalo in our case, in order to repress and seize the left, in order to thus restrain the revolution.

Revisionism, appealing to new circumstances, say:“…the PCP made the strategic turn with the arrest of Chairman Gonzalo and the Historical Central Leadership, and had to develop the New Strategy, new General Political Line, new tactic, new construction work, new mass work etc., a new line that had to be imposed in struggle to defeat the previous line…” We ask: when did they do that? They coordinated with the puppet Fujimori and presented it to the world. That was how it was; he put forward the distribution of leaflets from helicopters in Ayacucho, Huallaga, universities, etc. Was it perhaps a Regional Committee or a generated organization? Which one? It was the armed forces led by the SIN-CIA. Now, in order to recycle themselves, they have put forward the participation in the presidential elections of 2011. And the ROL of Nepal? The same; what has the CoRIM said before the capitulation, before these new “electoral” revisionists? The only thing they manage to do is INVESTIGATE! Enough! In spite of the arrest of our Great leadership and a large part of the leadership, and the infiltration of the reaction in our Party, the struggle against the ROL supported by the CIA gives us a great lesson in taking on new challenges, making the evaluation of the application of Maoism for it to serve the initiation of more people’s wars.

The call of the Central Committee and the whole Party is to demand the public presentation, in person and direct, of Chairman Gonzalo. This is a demand of the communists, and it is clear to us that the miserable ones involved in the isolation of the Great leadership will take on the measures already established for them by the Party. From Fujimori, Garcia, Gampetri, to the lawyers who since ’93 said that “…the Chairman does not want us to defend him…”, “he says it goes against his request for peace accords…”, accomplices who now call themselves paladins, their defenders, “candidates in elections” – we do not forget it. We say this to remind them of what they said. Sooner or later.

LONG LIVE CHAIRMAN GONZALO, GREAT LEADERSHIP OF THE PARTY AND THE REVOLUTION!