[Party of the Committees to Support Resistance – for Communism (CARC) is  associated with the (new) Italian Communist Party.  While upholding what they call Revolutionary Protracted People’s War, their strategy is very different from the Protracted People’s War strategy articulated by the RCP Canada or other pro-PPW Parties in imperialist countries.] 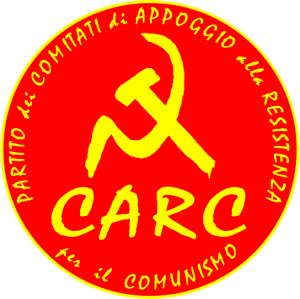 As the matter regards an issue debated in the international communist movement, we spread this communication widely.

The Thesis 10 of the Second Congress of our Party says that: “Communists’ intervention in the petty theatre of bourgeois politics makes sense and works only if it is connected and inserted in the strategy of RPPW the (n)PCI carries out for making Italy a new socialist country [described in its Manifesto Program, available on the site www.nuovopci.it, EiLE section, Note of the Translator]. Without this connection it would be only electoralism. It would only mean to make the friends of the friends of bourgeois Left Wing or grass root politics (movementism) with no objectives.” So, according to CARC Party’s Theses who, here in Italy, participates in the elections but not in the ambit of (n)PCI General Plan of Work, not in the ambit of the “caravan” that gathers the organizations working according to it, not in the ambit of the RPPW, is an electoralist (rightist opportunist) or movementist (leftist opportunist). This thesis is absolutely coherent with the conception of the (n)PCI exposed in its Manifesto Program.

The Manifesto Program, of the (n)PCI clearly says that our strategy is the revolutionary people’s war, that the accumulation of the revolutionary forces is the main objective of the first phase of the RPPW, that in this first phase our work is fundamentally divided in two fields: 1. consolidation and strengthening of the clandestine party that carries out the revolutionary people’s war, and 2. the mass work of the party consisting in promoting, organizing, orienting and directing the struggle of the popular masses in the struggle fronts indicated in the General Plan of Work.

The Manifesto Program says: “The essence of the Revolutionary Protracted People’s War consists of constituting the communist party as centre of the new popular power of the working class; in the growing mobilization and aggregation of all the revolutionary forces around the communist party; in the elevation of the level of the revolutionary forces; in their utilization according to a plan for developing a succession of initiatives that put the class conflict at the centre of country political life so that to recruit new forces, to weaken imperialist bourgeoisie’s power and to strengthen the new power, to succeed in constructing the armed forces of the revolution, to direct them in the war against the bourgeoisie, until turning the relations of force upside down, eliminate the State of imperialist bourgeoisie and establish the State of proletariat’s dictatorship.” [Manifesto Program in www.nuovopci.it, Note of Traslator].

So, our conception and strategy are surely different from the ones of other communist parties that today participate in the bourgeois political struggle in other imperialist countries but don’t pursue the strategy of the Revolutionary Protracted People’s War, and also from that of the communist parties of the Communist International in the imperialist countries (from 1919 to 1943 and 1956).

The position of (n)PCI and of CARC Party as regards the participation in the elections and in the bourgeois political struggle is substantially similar to that of the Communist Party of the Philippines, even if the Philippines are an oppressed country and not an imperialist country.

Breaking into the bourgeois political struggle gives the opportunity to sharpen the internal contrasts within the bourgeoisie, and to sabotage one of the pillars of the regime of counter preventive revolution, that is the following: “To develop channels for popular masses’ participation in bourgeoisie’s political struggle in a subordinate position, following its parties and exponents. The popular masses’ participation in bourgeoisie’s political struggle is an essential ingredient of preventive counterrevolution. The division of powers, the representative assemblies, the political elections and the struggle among various parties (the multipartitism) are essential aspects of the regimes of preventive counterrevolution. The bourgeoisie has to make the masses perceive as their own the State that in reality is that of imperialist bourgeoisie. All those who want to participate in political life must be allowed to participate. The bourgeoisie, however, lays and must lay down the tacit condition that they had to play along with ruling class’ laws: they had not to go beyond its social order. Despite this tacit condition, however and immediately the bourgeoisie is obliged to divide more definitely its political activity in two fields. A public one, which the popular masses are admitted to (the “petty theatre of bourgeois politics”). A secret one, reserved to the authorized staff. To tacitly respect this division and adapt itself to it is an indispensable requirement of any “responsible” politician”. Obviously, every tacit rule is a weak point of the new mechanism of power.” [ Manifesto Program in www.nuovopci.it, Note of Translator]

What does it means to sabotage this pillar, in Italy? As regards to it, it is useful to read this article by Rosa L. on latest issue (n. 33, November 2010) of La Voce, the review of the (n)PCI

To sabotage the third pillar of the regime of counter-preventive revolution.

Who does really sabotage bourgeois elections? Who prevents bourgeoisie and clergy from making the elections a campaign of intoxication of consciousnesses and dissemination of illusions, from renewing and strengthening by the elections the bonds between the people’s masses and parties and elements of the ruling classes?

Elections draw on the relation of force between the classes only if they raise the political consciousness and the organization of the oppressed classes and rouse them to participate more actively and at a higher level in class struggle.

If we are able to realize just this with the elections, then we turn against the bourgeoisie this instrument by which it aims to deceive and neutralize the people’s masses calling them every some years to decide who among the exponents of ruling class has to rule the petty theatre of bourgeois politics.

Differently from other revolutionary aspirants, we can use also the elections the bourgeoisie calls for realizing this aim, because we are not waiting for the revolution breaking out one of these days, because of a combination of unpredictable elements on which we have no influence. We construct socialist revolution creating a power more and more branched, pervading and strong, a direction more and more authoritative by the Party over the people’s masses he leads to participate in class struggle more effectively. We construct in the country the New Power done by party and by connected mass organizations for constituting a network that orients and direct people masses’ activity in every field, against the Authorities of the Papal Republic, against the owners, the clergy and their spokesperson, a network for making the life of bourgeoisie and its agents impossible.

Every electoral campaign gives us starting points and opportunities for raising people masses’ consciousness and organization, for weaving the network of the organizations around the Party Committees. We have to use it in order to this!

Some comrades believe that, profiting by the social position they inherit and that the capitalist system of social relations pledges them, bourgeoisie and clergy unavoidably manage to deceive people’s masses, to conquer and control their feeling and their mind. It is not true. Bourgeoisie and clergy have difficulties to do it. The practical experience generates continuous spurs to rebellion and thousands reasons for discontent within people’s masses. When communist movement was strong, that is when it directed an important part of people’s masses, even the Church had to “update” itself, shift to the left in order to not lose every credit and followers, and it was losing it all the same. The Second Vatican Council, called on January 1959 and begun on October 1962, was the synthesis of this attempt by the Catholic Church.

Bourgeoisie and clergy are able to control heart and mind of people’s masses only until we communist do not propose to the people’s masses a realistic way of emancipation, until the masses do not know us, we do not get them with our calls and our slogans or else we present ourselves full of doubts and hesitations, not knowing what to do, without convictions and certainty to win. Perhaps must we Communists display certainty and knowledge of thing that we have not? Nothing at all! On the contrary we have to deepen the matters we do not know well enough for an adequate action and a line well defined and sure about what to do. The Party is the organizational an moral context that allows to do it. Not by chance all the hesitant and doubtful individuals are also person who have no or little party spirit or they are even anti-party people.

Bourgeoisie and clergy control heart and mind of people’s masses also when we Communists present a way of emancipation done only by chatters always postponing facts for tomorrow. After they let establish in our country the Papal Republic, despite the forces accumulated during the clandestine struggle against fascism and during the Resistance, modern revisionists went on for twenty or thirty years promising socialism for next future, repeating empty Marxist formulas, every day postponing facts for tomorrow. Only after many years of such jokes and after they began to cooperate with the bourgeoisie in the repression of revolutionary movements and particularly of the Red Brigades these would be Communists lost heart and mind of people’s masses and clergy prevailed again.

Without the creation of the New Power the electoral campaigns are useless and only because of exceptional circumstances Communists are able to collect many votes. In the ambit of the creation of the New Power, elections are instead precious. They make tumble one of the pillars of the counter-preventive revolution upon which the Papal Republic stands: “To develop channels for popular masses’ participation in bourgeoisie’s political struggle in a subordinate position, following its parties and exponents.” [see above, Note of Translator] They create organizations of people’s masses autonomous from the bourgeoisie, linked to Party Committees and raise the political consciousness of people’s masses until they conceive a country ruled by the organized people’s masses themselves, without owners, until they aspire to create it and convince themselves they are able to create it. The revolutionary ideas, when they are right, when they penetrate into the masses, become a force that changes the world and men make history according to their aspirations.

The economic crisis already crumbled the second pillar of the counter-preventive revolution: “To satisfy the requests for a practical and economic improvement people’s masses claim more strongly”. Our breaking in bourgeois political struggle, if we do it well, will seriously crack the third pillar.